For the past two and a half centuries, Whitechapel have been acknowledged leaders in the production of musical handbells. Handbell ringing began in England about three hundred years ago. Even in those days, the best bells were made ‘at the sign of the three bells’ in Whitechapel. Indeed, it can be said that the whole art of handbell ringing – making molten metal into liquid sound – was built on Whitechapel handbells. Musical handbells, tuned in sets and fitted with leather straps, were introduced in the late 17th century and quickly became popular among tower bell ringers, not only for practising change ringing, but also for playing simple tunes. The art of tune ringing developed further in the 19th century when competitions were held, mostly in the North of England, between rival bands playing complicated scores and using large numbers of bells. 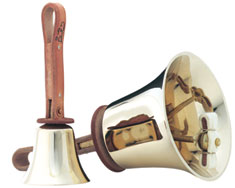 These events were popular with ringers and public alike, and although handbell ringing subsequently went into decline, its revival in the latter part of the 20th century was worldwide. Although over the centuries every opportunity as been taken to improve the manufacturing process, this has never been to the exclusion of traditional craft-based techniques. The result is handbells of a quality which cannot be matched by mass production methods. For more on the making of handbells, follow the links on the left.

Competence in handbell ringing can be very easily achieved by people of any age. Musical aspirations can quickly be fulfilled as a member of a group, without years of practise or particular musical knowledge being necessary. Handbell ringing appeals to young and old; in school teams, and in teams for disabled and blind people, in clubs and organisations of all kinds, and as part of Church worship. A “flick of the wrist” and a few friends are all you need! With increasing skills and ever larger numbers of bells, teams can progress to giving concerts, ringing at National Handbell Rallies, even at International Symposia which are held around the world – the opportunities are endless.