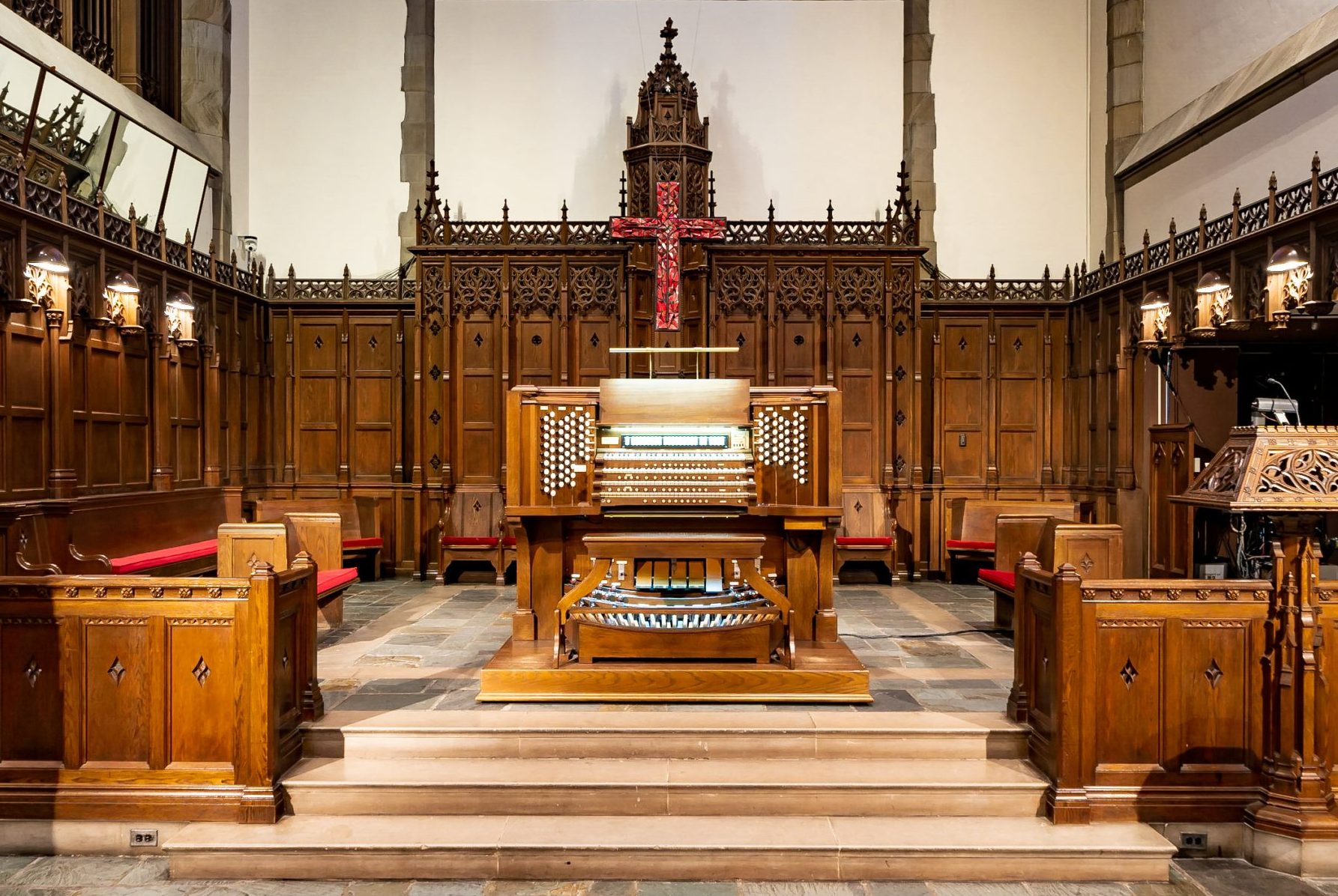 Originally given by Alice Martin as a memorial to her late husband, Walter Henry Martin, the Martin/MacNevin organ is comprised of 74 stops and 66 ranks containing 4,419 pipes. Each of the four manuals contains 61 notes and the pedal compass is 32 notes. The Choir, Swell and Solo divisions sit atop 73 note windchests. It employs electropneumatic key and stop action.

In the 1920s, a decision was made to relocate First Church to a new home at 444 East Broad Street. To match the planned scale and scope of the new John Russell Pope edifice, an equally grand organ was needed. The firm of W.W. Kimball (Chicago) was chosen to design and build an instrument for First Church’s new building. The organ was installed and dedicated in late 1931.

With all six divisions completely enclosed behind independent swell shades, the symphonic nature of the organ is fully realized. The main organ resides in the west Chancel in chambers behind a magnificently carved wooden organ screen (also a memorial gift of Alice Martin). Facing this screen, the Great and Pedal divisions are on the right side, lower level. The Solo is on the left side, lower level. Directly above the Solo division is the Swell division. The Choir sits on top of the Great. The Echo division is on the West wall of the Gallery, slightly behind the Beckerath organ case.

By the late 1960s, the organ was experiencing maintenance issues paired with changing tastes in organ building. Because of this, and because of the new Beckerath organ that was installed in 1972, she was used very rarely from 1972 until 2004. Thanks to a generous bequest from Jean MacNevin, one of the Kimball’s most ardent supporters, the organ was completely restored and renovated from 2002-2004 by the Peebles-Herzog Organ Company with the help of thousands of hours given by First Church volunteers.

This renovation returned the Kimball organ to her former glory. Today, the Martin/MacNevin Memorial organ is heard in weekly worship accompanying congregational song, choral anthems, and providing a completely different tonal palette from the fine Beckerath instrument. She is regularly heard on the Concerts at First Church series, and remains a significant asset to First Church and the international music community.