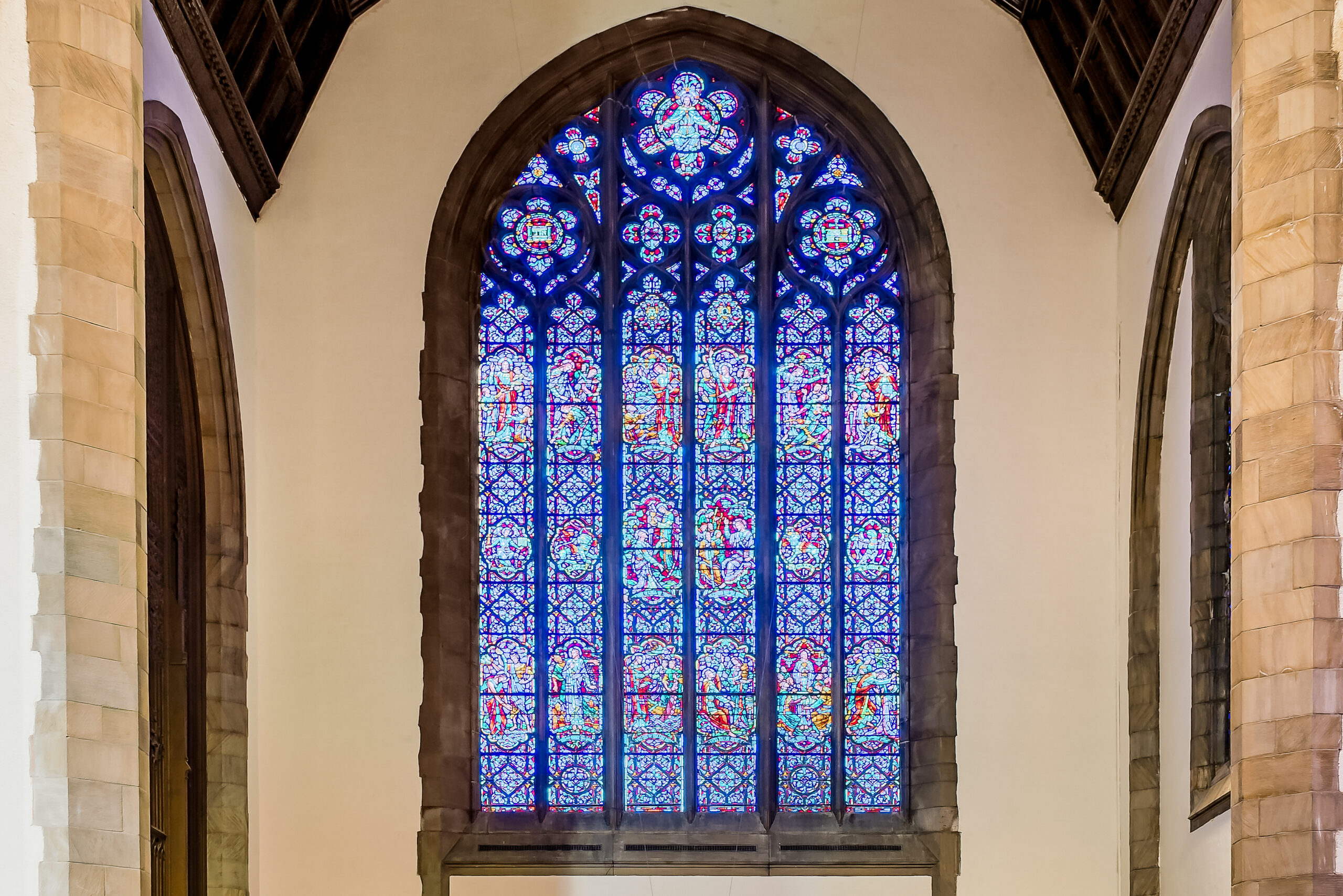 In 2012 the effects of gravity had led to buckling, wavy glass and loose pieces, plus fractures that were found in some masonry sections. An assessment determined that the window should be rebuilt. The Willet Houser Architectural Glass Studio was chosen to do the restoration. The entire window was removed to their workshop in Winona, Mn. Almost a year later it was returned. A rededication was held on Legacy Sunday September 13, 2013 which included a Litany or Rededication and the performance of a new festival anthem for the occasion entitled, “In Praise of the Light.”

“In praise of the Light”

About the Composer of “In Praise of the Light”

Neil Cox has been Director of Music of Lancing College Chapel since 1978. Born in Llanelli in 1955 he attended the local Grammar School and studied the organ with Robert Joyce at Llandaff Cathedral. As a teenager he played timpani and percussion in the National Youth Orchestra of Wales, and his teachers at Cambridge included Sir David Willcocks, Dr. George Guest, Dame Gillian Weir and John Rutter. As an organist he played recitals on BBC Radio 3 and in many churches and cathedrals in the UK and in Europe, including St Paul’s Cathedral. At Lancing he was responsible for the design and building of the new Walker and Frobenius organs in the great College Chapel, and he has recorded a number of CDs with the College choir. In I 998 he conducted the first performance of Arvo Part’s Triodion in Westminster Abbey, commissioned to mark the 150th anniversary of Lancing.

As a composer his choral music has been sung in many churches and cathedrals with distinguished musical foundations. His short anthem Keep me as the Apple of an eye has been performed widely – at the Three Choirs Festival, in St Thomas’s Church New York, on BBC Radio 3 etc – and his Missa Brevis was given its first performance on BBC Radio 4. His festival anthem War in Heaven was commissioned by Coventry Cathedral, and has entered the repertoire of numerous choirs; in June 2012 it was performed by the City of Birmingham Symphony Orchestra in a concert marking the 50th anniversary of Coventry Cathedral, alongside the premiere of James MacMillan’s Gloria: this concert formed part of the 2012 Cultural Olympiad. His 201 I setting of the Magnificat & Nunc Dimittis was broadcast live from Gloucester Cathedral on BBC Radio 3 on Easter Sunday last year. Other first performances last year included Plait, Hymn & Laud ( as part of London Festival of Contemporary Church Music), Liturgies of Time & Light (in the Peterskirche, Leipzig), Prayer of the Venerable Bede (Merton College, Oxford) and The River of Life, a commission from the Southern Cathedrals Festival for first performance in Salisbury Cathedral in July, when it was sung by the combined choirs of Salisbury, Chichester and Winchester Cathedrals and broadcast on BBC Radio 3. Forthcoming work includes commissions from Ampleforth Abbey, from the 2013 Edington Festival, and one for a set of evening canticles to celebrate the 750th anniversary of Balliol College, Oxford.