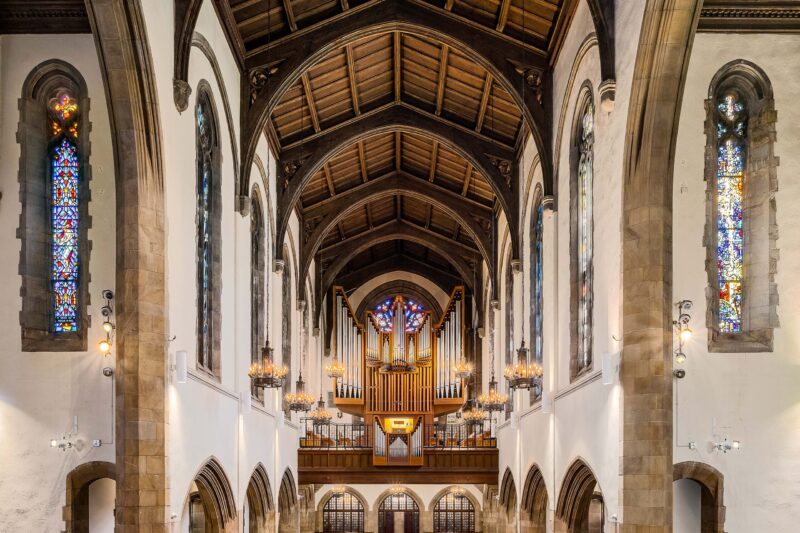 The Beckerath organ is comprised of 47 stops, 73 ranks, and contains 3,575 pipes. Each of the three manuals contains 56 notes, and the pedal compass is 32 notes. It employs mechanical key action and electric stop action. The main case is of solid oak. The metal pipework is pure tin, while the wooden pipes are of mahogany. The console (located in the main casework) uses grenadille, pear, and ebony woods. Placement of the divisions in the case are as follows: the Great is centrally located directly above the horizontal trumpets; the Swell is behind the louvers; the Positiv hangs off of the Gallery rail in its own case; the Pedal is in two towers on either side of the Great and Swell.

In 1968, an organ committee was formed at First Congregational Church to study the problems of an aging and crumbling pipe organ that had led the music and song of the church for 37 years. After deciding that a completely new pipe organ should be installed in this historic and architecturally rich John Russell Pope edifice, this committee chose the Hamburg, Germany, firm of Rudolph von Beckerath (1907-1976) to build and install a visually beautiful and aurally thrilling three manual, 47 stop, mechanical action organ in the Nave’s large Gallery. After extensive acoustical renovations, the organ was delivered and installed in 1972 at a cost of 300,000 Deutsche Marks.

The instrument was inaugurated in a series of three recitals in the fall of 1972 by international and national artists, and was immediately recognized as one of the finest pipe organs in the Midwestern United States. Since that time, the organ has been visited by literally thousands of travelers and organ enthusiasts. The list of artists that have played recitals here reads like a virtual who’s who in the organ world of the late 20th and early 21st centuries. Today, she enriches the worship life of this congregation every week, and magnifies the musical life of Columbus, Central Ohio and beyond, as her pure and clear tones serve as a beacon of clarity in our communities.

“Joan Lippincott, the retired organist of Princeton University, and one of the pre-eminent players of our day – and one, I may add, who always comes to morning worship when she is going to give an organ recital in the same place that afternoon – stated from the gallery, during the latest of her three recitals in this place, that the Beckerath is one of the finest instruments in the United States. Many of those within the sound of my voice may not know that Rudolf von Beckerath, than whom there was no greater orgelbaumeister of his time, categorically refused to create an instrument for Stanford University because the authorities there would not improve the acoustics of their chapel. We could. We did.”

The Rev. Dr. Chalmers Coe; excerpted from a sermon preached at The First Congregational Church, United Church of Christ, on June 1, 2003, being G. Dene Barnard’s recognition as retiring organist and choirmaster. CLICK HERE FOR THE COMPLETE SERMON TEXT